Even though I don’t necessarily need to read all the gems that I find at the book sales—it’s enough to surround myself with them—I do read them.  Now, to be honest, if a book is more than 50 or 100 years old, after quickly thumbing through it to touch and smell the pages, I generally don’t feel excited enough to sit down and read it on the spot.  I confess that I expect to find it dry, pedantic, colorless or irrelevant.  But I am almost always wrong.

I find surprisingly relevant, valuable words, stories and messages written by authors with extraordinary depth, thoughtfulness, insight, and wholesomeness, and a different internal perspective than many contemporary authors.  Their attitudes and perspectives very often inspire and elevate my own.

Some antique books are actually difficult to read because they are visually and verbally dense, but they are well worth the effort.  An example is R.D. Blackmoor’s Lorna Doone, written in 1869.  The first time I ever saw this book was at a library in Sylvan Lake, Alberta, where we were camping.  I had an afternoon to relax so I decided to see what kind of love stories people in the ­­­­19th century wrote.  But the “old” definition of romance is not focused entirely on a love story.  I was surprised and at first disappointed that the Romance of Exmoor was not the kind of romance that Jane Austen or Georgette Heyer wrote.

Lorna Doone falls under the definition of “a novel depicting heroic or marvelous deeds, pageantry, romantic exploits, etc., usually in a historical or imaginary setting.”  I muddled through the first several chapters and then realized I didn’t know what was going on with the characters or the plot.  I had to restart it about four times, but after that, something magical happened and I got into the language.  Then I couldn’t put it down!  I encourage you to give it a try, in the original or a more recent version.  It’s a story of loyalty, love, courage, heroism—and it’s not just the men who risk their lives. 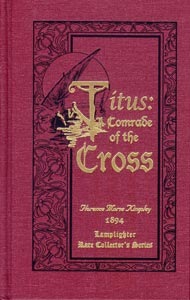 Another example is one published in 1894, Titus, a Comrade of the Cross, a book my mom gave me.  Apparently, the original publisher of this book offered a $1,000 reward to anyone who could produce a manuscript that would set a child’s heart on fire for Christ. In six weeks, the demand was so great for Florence Morse Kingsley’s book that they printed 200,000 additional copies.  Can you imagine that in 1894?

For years I was thrilled enough to just look at the unique cover and text.  But again, once I finally started reading it and got a feel for the language, I was immersed in a suspenseful adventure.  In the midst of the gripping plot, I discovered that a whole chunk of the pages was missing (don’t tell Mom!), but I just picked it up on the next available page and devoured the rest of it.  In fact, I felt such admiration and affection for one of the characters, we ended up using his name for the middle name of one of our children.

Are you a kindred old-book-loving spirit?  Leave me a comment, or a Like, so I can find you!