Diary of Anna Green Winslow, a Boston School Girl of 1771

In previous posts, I wrote about my absolute joy in reading Extracts from Adam’s Diary and Eve’s Diary.  Reading (and even re-reading) some parts of these made me laugh almost to exhaustion. Other parts were serious and surprisingly tender compared to the other books I’ve read by Mark Twain.

At Project Gutenberg (gutenberg.org) I also found Diary of Anna Green Winslow, a Boston School Girl of 1771. It was written by a 12-year-old girl, and published in 1894. The editor, Alice Morse Earle, included an in-depth family history.

Anna was born in 1759 in Nova Scotia, Canada.  Her family did not feel that Halifax could provide the society or the schooling that would “finish” their daughter. So they sent 10-year-old Anna to America to live with Judge Winslow’s older sister, Aunt Sarah Deming, and her husband, in Boston.

Anna is clearly fascinated with people, and details visits and conversations with the many people she interacts with.  She writes about fashions, the weather (waist-high snow!), her sewing skills and various domestic duties, and her attempts to improve her writing skills.  She records the many visits she makes to help and encourage friends and relatives who are ill.  Anna mentions her spiritual progress in strengthening her relationship with God, and writes many notes about Biblical scriptures she reads and sermons she hears. 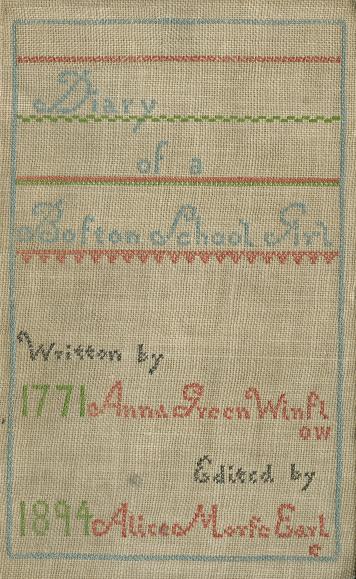 I find it fascinating to compare people from different eras, and noticed an obvious contrast in Anna’s memoirs between the orderliness and apparent serenity of their lives, and our disjointed, hurried lives of today.

Parents and society required children and teens to work more in 1771.  A sense of duty and responsibility to family and society was more internalized and self-motivated in children then, compared to now. Family members seemed more engaged with each other then–especially the females and children who spent so much time in the home together.  Yet I am surprised that there was so much emphasis on proper etiquette and connections that families would actually send a 12-year-old girl away to be trained and refined!

Twelve-year-old Anna rarely talks about her friends.  By contrast, for many youth in 2016, friends seem to have taken the place—or a higher priority—over family relationships. I think our children today devote more time on physical fitness, entertainment, pleasure, and buying “toys” than in Anna’s time, partly because our automated society gives us more free time and money.  But it’s also partly because we as adults encourage children to have fun.

However, having said all that, I don’t think that pre-teens are that different now than they were then in 1770’s Boston, when it comes to what is truly important to them.  Children value that family closeness no matter what century they live in. And they all have hopes and dreams to be a valuable member of society, be accepted by their peers, enjoy particular hobbies, be healthy, and many still reach for a connection with the divine. 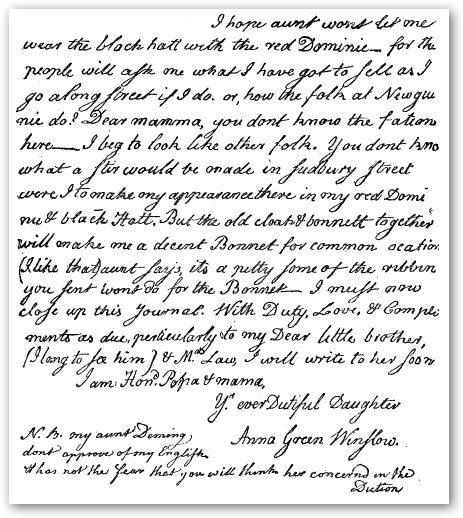 In this handwritten letter, Anna seems annoyed that her mother doesn’t let her wear the latest fashions, something that annoys plenty of Anna’s 2016 counterparts as well!  She says that her hat makes her look like a “street seller”:

“Dear mamma, you don’t know the fation [fashion] here—I beg to look like other folk…”

She closes this journal entry (which is also a letter to her mother) affectionately:

“…with duty, love and compliments as due, particularly to my dear little brother (I long to see him)…Your ever dutiful daughter…”

Up next is a diary reluctantly written by a boy in rural America in the 1860’s.

You can read buy Anna’s diary at Amazon, and read it at  https://archive.org/stream/diaryofannagreen00wins#page/72/mode/2up .

Project Gutenberg is also a tremendous resource.  Below are the links of these three diaries, and there are many more diaries there!  I hope you will find something you enjoy there.