Eve and her Pet Brontosaurus

As I mentioned in my previous post, I love diaries, and at Project Gutenberg I found many diaries available to read, listen to and download to my Kindle.  The first one I read was Excerpts from Adam’s Diary, supposedly written by Adam.  This book by the American humorist Mark Twain was published in 1904.

Well, naturally, Eve also kept a diary, which Twain “discovered.”  It was first published in the 1905 Christmas issue of the magazine Harper’s Bazaar, and in book format in June 1906.

Mark Twain is known for his wit, but I had no idea how eloquent and tender he could be.  Here are journal entries from Eve’s Diary.  Notice that, compared to Adam’s focus on building and exploring, Eve is concerned with order and beauty.  She delights in her endless discoveries of God’s gifts of flowers, plants, animals…and even her own reflection!

Here are some of my favorite passages:

First days in Eden, and losing the moon

Everything looks better today than it did yesterday. In the rush of finishing up yesterday, the mountains were left in a ragged condition, and some of the plains were so cluttered with rubbish and remnants that the aspects were quite distressing…. There are too many stars in some places and not enough in others, but that can be remedied presently, no doubt.

The moon got loose last night and slipped down and fell out of the scheme—a  very great loss, it breaks my heart to think of it. There isn’t another thing among the ornaments and decorations that is comparable to it for beauty and finish. It should have been fastened better. If we can only get it back again… For I do love moons, they’re so pretty and so romantic. I wish we had five or six; I would never go to bed; I should never get tired lying on the moss-bank and looking up at them.

I got a basket and started for a place on the extreme rim of the circle, where the stars were close to the ground and I could get them with my hands… But it was farther than I thought… I couldn’t get back home, it was too far and turning cold; but I found some tigers and nestled in among them and was most adorably comfortable, and their breath was sweet and pleasant, because they live on strawberries. I had never seen a tiger before, but I knew them in a minute by the stripes.

Her first impressions of Adam

I followed the other Experiment around, yesterday afternoon, at a distance, to see what it might be for, if I could. But I was not able to make it out. I think it is a man. I had never seen a man, but it looked like one and I feel sure that it is what it is. I realize that I feel more curiosity about it than any of the other reptiles. If it is a reptile, and I suppose it is; for it has frowzy hair and blue eyes, and looks like a reptile. It has no hips; it tapers like a carrot; when it stands, it spreads itself apart like a derrick; so I think it is a reptile, though it may be architecture.

I laid a dry stick on the ground and tried to bore a hole in it with another one, in order to carry out a scheme that I had, and soon I got an awful fright. A thin transparent bluish film rose out of the hole, and I dropped everything and ran! I thought it was a spirit, and I WAS so frightened! … there was a pinch of delicate pink dust in the hole. I put my finger in, to feel it, and said OUCH! and took it out again. It was a cruel pain. I put my finger in my mouth; and by standing first on one foot and then the other, and grunting, I presently eased my misery; then I was full of interest, and began to examine…Suddenly the name of it occurred to me, though I had never heard it before. It was fire!

….perhaps I ought to remember that she is very young, a mere girl, and make allowances. She is all interest, eagerness, vivacity, the world is to her a charm, a wonder, a mystery, a joy; she can’t speak for delight when she finds a new flower, she must pet it and caress it and smell it and talk to it, and pour out endearing names upon it. And she is color-mad: brown rocks, yellow sand, gray moss, green foliage, blue sky; the pearl of the dawn, the purple shadows on the mountains, the golden islands floating in crimson seas at sunset, the pallid moon sailing through the shredded cloud-rack, the star-jewels glittering in the wastes of space—none of them is of any practical value, so far as I can see, but because they have color and majesty, that is enough for her, and she loses her mind over them.

If she could quiet down and keep still a couple minutes at a time, it would be a reposeful spectacle. In that case I think I could enjoy looking at her; indeed I am sure I could, for I am coming to realize that she is a quite remarkably comely creature—lithe, slender, trim, rounded, shapely, nimble, graceful; and once when she was standing marble-white and sun-drenched on a boulder, with her young head tilted back and her hand shading her eyes, watching the flight of a bird in the sky, I recognized that she was beautiful.

If there is anything on the planet that she is not interested in it is not in my list…When the mighty brontosaurus came striding into camp, she regarded it as an acquisition, I considered it a calamity;…she wanted to domesticate it, I wanted to…move out.  She believed it could be tamed by kind treatment and would make a good pet; I said a pet twenty-one feet high and eighty-four feet long would be no proper thing to have about the place, because, even with the best intentions and without meaning any harm, it could sit down on the house and mash it, for any one could see by the look of its eye that it was absent-minded…

She thought we could start a dairy with it,…but…it was too risky…She thought…we could stand him in the river and use him for a bridge…but it failed: every time she got him properly placed…he came out and followed her around like a pet mountain.  Like the other animals.  They all do that.

Eve ponders her existence, and the stars melting

At first I couldn’t make out what I was made for, but now I think it was to search out the secrets of this wonderful world and thank the Giver of it all for devising it.

By watching, I know that the stars are not going to last. I have seen some of the best ones melt and run down the sky. Since one can melt, they can all melt; since they can all melt, they can all melt the same night. That sorrow will come–I know it. I mean to sit up every night and look at them as long as I can keep awake; and I will impress those sparkling fields on my memory, so that by-and-by when they are taken away I can by my fancy restore those lovely myriads to the black sky and make them sparkle again, and double them by the blur of my tears.

Forty Years Later… It is my prayer, it is my longing, that we may pass from this life together–a longing which shall never perish from the earth, but shall have place in the heart of every wife that loves, until the end of time, and it shall be called by my name.

At Eve’s Grave:    ADAM: Wheresoever she was, THERE was Eden. 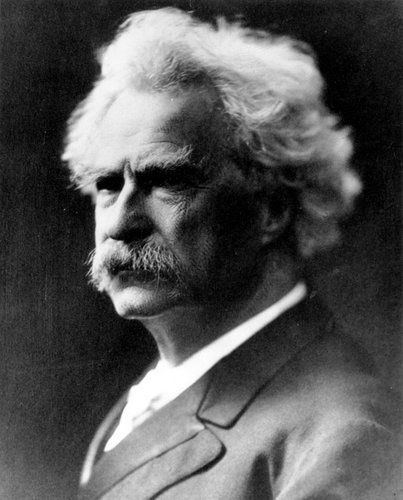 As you can see, this short book is by turns charming, hilarious and serious.  Eve’s Diary is one of the most imaginative books I’ve read, my current favorite of Mark Twain’s wealth of writings. I hope you will read it and also enjoy all of the many detailed pen and ink drawings. It’s also available as an ebook at Project Gutenberg, and in print form at Amazon and other online bookstores.

I’d love to hear your thoughts on these diaries by Mark Twain, and diaries in general, and you can leave a comment below.  More diaries to come!