Upside: Surprising Good News About the State of Our World by Bradley R.E. Wright, PhD

I’m always interested in hearing good news, but rarely expect positive reporting about the state of the world because I see so much in the television broadcast that discourages me. In fact, I approached this book with a bit of cynicism.

But Dr. Wright offers an encouraging look at the status of the world’s economy, education, relations, health, crime, freedom, faith and environment, backed up by statistics. He also proves that if we compare our lives today with previous years, we have a lot to be thankful for. I have been amazed at all the truths I would never have known if not for this book.

The author starts by discussing why most of us have a strong feeling that the world is in worse shape than ever before, and he counts the cost of pessimism. We learn about the doom-and-gloomers over the years, and how few of their predictions actually came true; now we can keep that in mind the next time we hear dark predictions on the news.

The first two chapters shift my perceptions, as I realize how much of what I “know” about the state of our world is based upon what is reported by the media for a drama-hungry audience. I also see how my perception of “the good old days” (all the years before I was born) is skewed and how much better today’s world is in many ways.

Some positive statistics about education and intelligence are an example of one pleasant surprise. Test scores are holding steady or increasing for the years since the early 1970’s when the U.S. started testing students, and students are taking more advanced math classes than their parents took. Education levels have risen around the world significantly since the turn of the century, and class sizes have actually decreased over time, despite that fact that more people attend school. 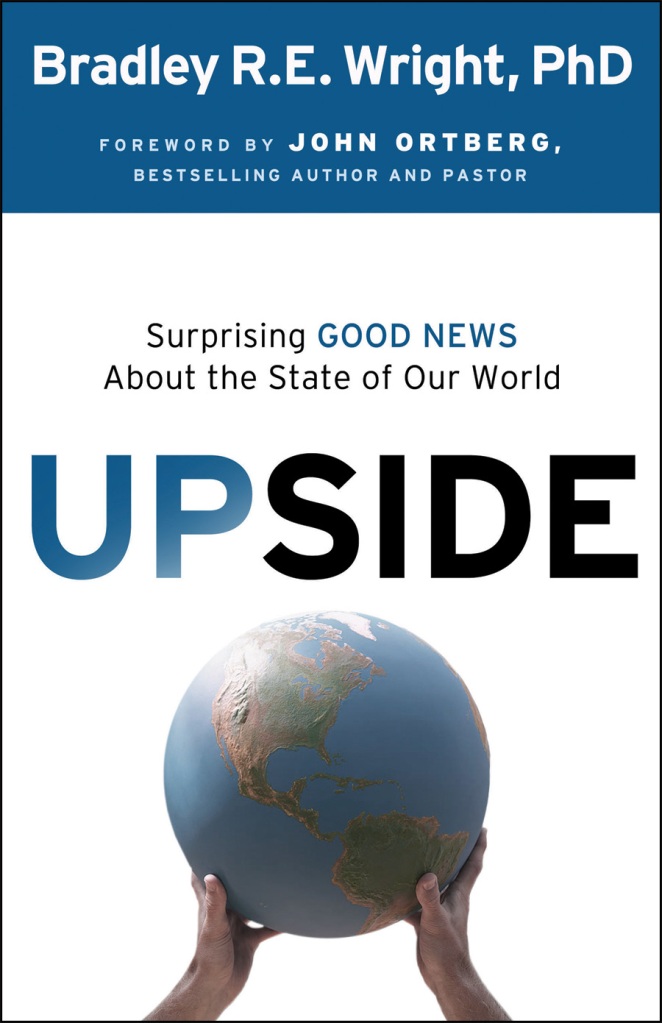 To me, one of the most shocking statistics Dr. Wright presents is the life expectancy chart. Did you know that the average life expectancy in the United States in 1900 was only about 45 years? As recently as 1950, India and China had life expectancies of about 40 years, but now both are up to about 65 years, a 50% increase in only a half-century!

In 1900 half the workers in Rhode Island factories and mills were eleven years old or younger, some as young as six or seven working twelve-hour shifts. That makes me realize how easy my own childhood was by comparison. This and other revelations makes me tend to agree with the author that the world, in many ways, is actually getting better.

Would you believe it if someone told you that our leisure time has increased? It has, but our technology makes us feel busier than ever. Crime rates have gone down—the data is available to prove it—and there is a worldwide increase in freedom. These and other facts are a balm to our news-shy souls.

I am not a history buff, and rarely study the economic history of any country, but I have learned a lot of it from these pages. The author, a professor of sociology, also gives examples of Christians making a difference in each issue he discusses. I appreciate his plain writing, his objectivity and his sense of humor.

In a book so full of data and graphs, it would be easy for a reader to get overwhelmed and put it down. But the truths revealed are so interesting, it doesn’t get dry. In places, however, the text was so detailed that it was far more than I needed, so I scanned it until a new topic was introduced. I valued the graphs, which were simple to understand and instantly gave a visual perception of the excellent research.

The author’s goal is to separate fact and fiction, and he does that well, so that we can recognize and celebrate the genuine progress and successes on this earth. I recommend this book. It is worth reading for an accurate assessment of the state of the world, especially our country, and an appreciation of how far we’ve gone in the past century.

[Disclosure of Material Connection: I received this book free from the publisher through the Bethany House book review bloggers program. I was not required to write a positive review. The opinions I have expressed are my own.]