When I was in elementary school in Denver, Colorado, there was a book high on the top shelf of the school library that kept catching my eye. The book’s title was my name. How intriguing! I saw it year after year, but I couldn’t reach it, and anyway it looked too thick and grown-up to me. After I left elementary school, from time to time, I would run across the book. I got the impression that it was an overly historical book and very dull. Nevertheless, I’d often think, “One day I’m going to read that.”

Fast forward almost twenty years and I was now living in San Diego, California. One of the places a co-worker had taken me was called Old Town, a historical part of San Diego that included an area called “Ramona’s Marriage Place”. (Here is a photo of me there in 1981.) One day I was browsing around at the public library…and there it was! Helen Hunt Jackson’s book, Ramona. Well within reach now, and no time like the present, I checked it out. I was surprised to find out that it was considered a classic American novel. And to my amazement, this historical novel was set right THERE…in the San Diego area! 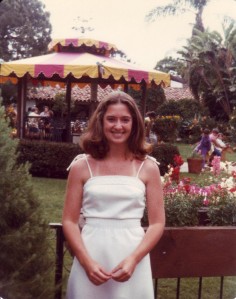 This novel tells the story of Ramona, a half-native woman from a wealthy Spanish family, who meets Alessandro, one of the Native American shepherds near her home. They develop a friendship which turns into love, marriage, devotion and tragedy because of discrimination against her husband.

Helen Hunt Jackson delves into some politically incorrect territory for that time in history. In October of 1879, she learned about the plight of the Native Americans and the mistreatment they received from the government. Sympathizing with their cause, she toured many of their impoverished communities, and wrote articles and a book to publicize their struggles. In 1883 the plot of a novel came to her suddenly one morning, and she began writing.

Of course I highly recommend this classic novel. The inside flap of my 1912 edition says

For over a half century Helen Jackson’s romantic story of Spanish and Indian life in California has been widely read until it has become an American classic. Originally published in 1884, “Ramona” has been issued in various editions, with a total of 135 printings. The Atlantic Monthly has termed the story “one of the most artistic creations of American literature,” while the late Charles Dudley Warner [an American essayist, novelist, and friend of Mark Twain] called it “one of the most charming creations of modern fiction.” Born in 1831, Mrs. Jackson was an ardent champion of the Indians to the end of her useful life, in 1885. “Ramona” has been three times produced as a motion picture, been played on the stage, adapted for a pageant and may eventually be utilized for a grand opera.”

More of my personal connection

I have always had an interest and a special place in my heart for the Native Americans, so of course I loved this book with its focus on these people. That, along with the fact that it was a romance based on actual history, including characters living out their faith, made it nearly the perfect book. I won’t give away the ending, but I will say that the tragedy in the story was softened by an unexpected ending of kindness.

The book inspired the Ramona Pageant, which is still performed in the hills of Hemet, California. It is said to be California’s Official Outdoor Play and the longest continuously running outdoor drama in the United States. The original “Ramona” movie came out in 1928, and was remade in 1936, starring Don Ameche and Loretta Young. I’d always known that my grandmother named me after the song, but when I found out that the song was created for the movie based on the book that I loved, I was beyond excited!

While I was growing up, many teachers and other adults sang the first few lines of the song to me, and I finally found a copy of the entire song online. It just so happens that I love it; it is a very sweet, flowing love song. I love the references to nature–hills, mountains, babbing brook, kissing the sky, meeting by the waterfall–and hearing the church “mission bells above”.

One year our family toured southern California and we stayed overnight in the town of Ramona, northeast of San Diego. The town was named to capitalize on the popularity of the fictional character from the best selling novel. I made sure we stopped in Temecula, one of the towns mentioned in the novel (much to my family’s disappointment!), where I purchased a book called The Annotated Ramona and a little Spanish maiden figurine as a memento. The book opened up the whole historical side of the book to me, as well as a biography of the author. I learned that later in her life she moved to Colorado, my home state. Magical!

Here is a postcard a friend in California recently sent me. Notice in the far lower right corner it says, “The Real Ramona”. I’m not sure what that means, exactly, but it is clearly quite an old photograph. Very intriguing. 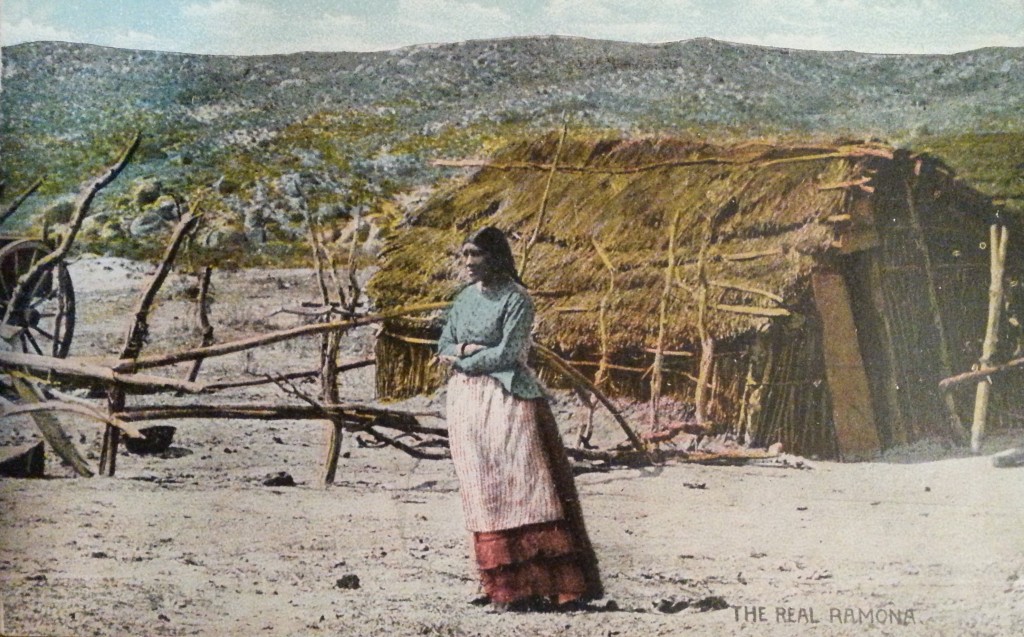 I hope you’ve enjoyed this little bit of my history, and will check out this wonderful book. It’s a gem!