Our cast of characters in this book includes Sir Cumference, his wife, Lady Di of Ameter, their son Radius, and his friend, Vertex.  From the first look at the title, through the very last page, I was smiling at the author’s ingenious plays on words.  “Will Vertex’s sharp thinking give him the edge?”

In Sir Cumference and the Sword in the Cone, King Arthur has hidden his sword Edgecaliber, and whoever finds it will be the next king.  The only clue to its whereabouts is a parchment with a poem on it, as well as mysterious shapes.  The poem gives clues to follow, and later Radius and Vertex learn the keys to the shapes that look like tabletops (which math teachers know as “nets”).

Radius and Vertex set out together on their quest for the crown.  First they go looking for the carpenters who would know all about tabletops, where they learn that the shapes can be cut and folded into three-dimensional geometric solids.  This gives them their next clues and off they go in search of the sword.

And lest you think that the reader is only learning about polyhedrons in Sir Cumference and the Sword in the Cone, know that the friends ultimately reach their goal by measuring, adding, subtracting and dividing.

At the end of the book, a note explains one of the mathematical tests the characters used to close in on the place where the sword is hidden.  Ever heard of Euler’s Law?  Well, here you are introduced to this eighteenth century Swiss mathematician in an interesting and unforgettable way.

Gorgeous drawings fill the pages of this imaginative and educational book, another way to learn math—and medieval history!—while engrossed in an exciting plot.

The art is cheerful, and I’m sure you’ve guessed that the author is a teacher.  Since she hated math when she was young, she wants to help children understand math ideas more easily through her stories.

What fun—a heroic quest and math, all in one story!  With a great imagination and sense of humor, the author tells a great tale with an intermingling of mathematical concepts.  Think: Knights of the Round Table meet your math teacher Mr. Einsteinberg.

For a review of another book in the series, Sir Cumference and the Great Knight of Angleland: Knighthood by Degrees!, see my review at Best Children’s Books.

I can’ wait to check out the other books in the series, like this one: 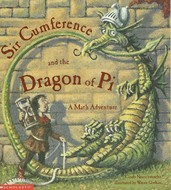 There is comedic gold behind every painful experience. Here are mine.

12 year old, exploring the world one country at a time!